‘I Am Not a Serial Killer’ receives rave reviews 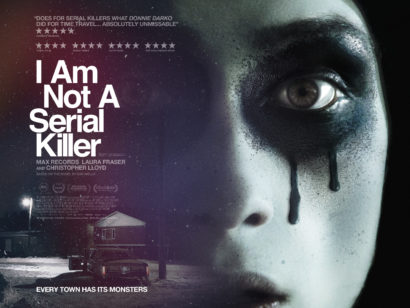 It’s safe to say that ‘I Am Not a Serial Killer’ has already impressed the critics if the rave reviews it has received thus far are anything to go by. To highlight a few:

‘I Am Not a Serial Killer’ is based on the cult novel by Dan Wells, it follows John Wayne Cleaver, a sixteen year old teenager with homicidal tendencies and his mission to hunt down and destroy the anonymous serial killer terrorizing his quaint home town. He can finally put his morbid obsessions with death and murder to good practice by letting his dark side loose in order to conquer the mystery killer.

Starring in ‘I Am Not a Serial Killer’ is the legendary Christopher Lloyd renowned for his role in the ‘Back to the Future’ trilogy, Max Records who found fame as a child with a lead part in ‘Where the Wild Things Are’ and Laura Fraser who has recently starred in TV phenomenon ‘Breaking Bad’.

This indie thriller is already getting people talking for all the right reasons and we look forward to hearing more great feedback upon its UK release on the 9th December. Click here for more information, including screening details.