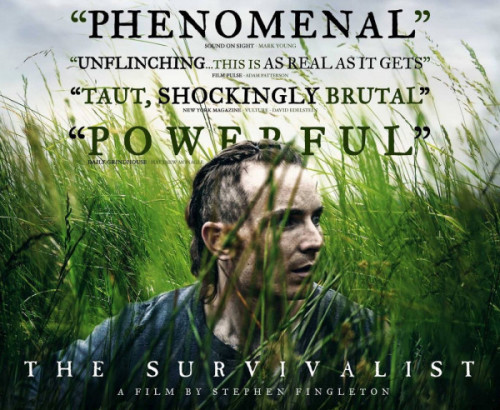 Bulldog Film Distribution has acquired UK rights to Stephen Fingleton’s masterful feature debut THE SURVIVALIST, which is playing to sell-out houses in the Thrill section of the BFI London Film Festival this week.

The remarkable thriller premiered at the Tribeca Film Festival in New York to rave reviews and has since played numerous other festivals where it has received great acclaim for Fingleton who has been identified as an important new cinematic voice. The film received Special Jury Mentions at both Tribeca and Strasbourg Film Festival and Time Out New York’s Joshua Rothkopf described it as a “masterful, uncompromising feature.”

The film stars Martin McCann (Shadow Dancer, The Pacific, Clash of the Titans), Mia Goth (Nymphomaniac), and Olwen Fouéré (This Must be the Place) and is produced by Wayne Marc Godfrey (Silence, Cake, Bus 657), Robert Jones (The Usual Suspects, Babylon, A Patch of Fog) and David Gilbery (Bone Tomahawk, Dead Snow: Red vs. Dead). It was developed with the support of the BFI Film Fund and Northern Ireland Screen’s New Talent Focus Scheme, in association with Goldcrest and K5 International, who is handling international sales.

THE SURVIVALIST is the near future story of a man (Martin McCann) eking out a meagre existence on a secluded smallholding deep in the forest. When a starving woman (Olwen Fouere) and her teenage daughter (Mia Goth) discover his farm his loneliness drives him to strike a bargain with them in return for bed and board. But as desire becomes stronger than necessity the exchange becomes an uneasy ongoing arrangement, which threatens not only his carefully constructed world but also his life.

Writer/director Stephen Fingleton was selected as one of Screen’s Stars of Tomorrow. His screenplay for THE SURVIVALIST featured on the Hollywood Blacklist and topped the UK Brit List, and his short film SLR was shortlisted for an Oscar last year. THE SURVIVALIST was also recently showcased as part of the BAFTA Brits to Watch programme in LA and New York.

“The Survivalist is a tense and distinctive thriller that will have UK audiences gripped from start to finish and leave them thinking about it long after viewing, says Alan Partington, Managing Director, Bulldog Film Distribution. Writer/director Stephen Fingleton has crafted a powerful, absorbing and very assured debut feature, with incredible performances from Martin McCann, Mia Goth and Olwen Fouere. We’re delighted to add it to our growing theatrical schedule for 2016.”

Richard Williams, CEO, Northern Ireland Screen said: “Northern Ireland Screen has a clear policy of championing talent; we have been long-standing supporters of Stephen, granting him our Bill Miskelly Award in 2007, which supported his MA in Screenwriting. Having funded his recent short film Magpie and this amazing debut feature, The Survivalist, through our New Talent Focus scheme, we are delighted that the film has now secured distribution and a wider audience can experience what this exciting new filmmaker has to offer.”