Mouthpiece – in virtual cinemas and on demand 12 March 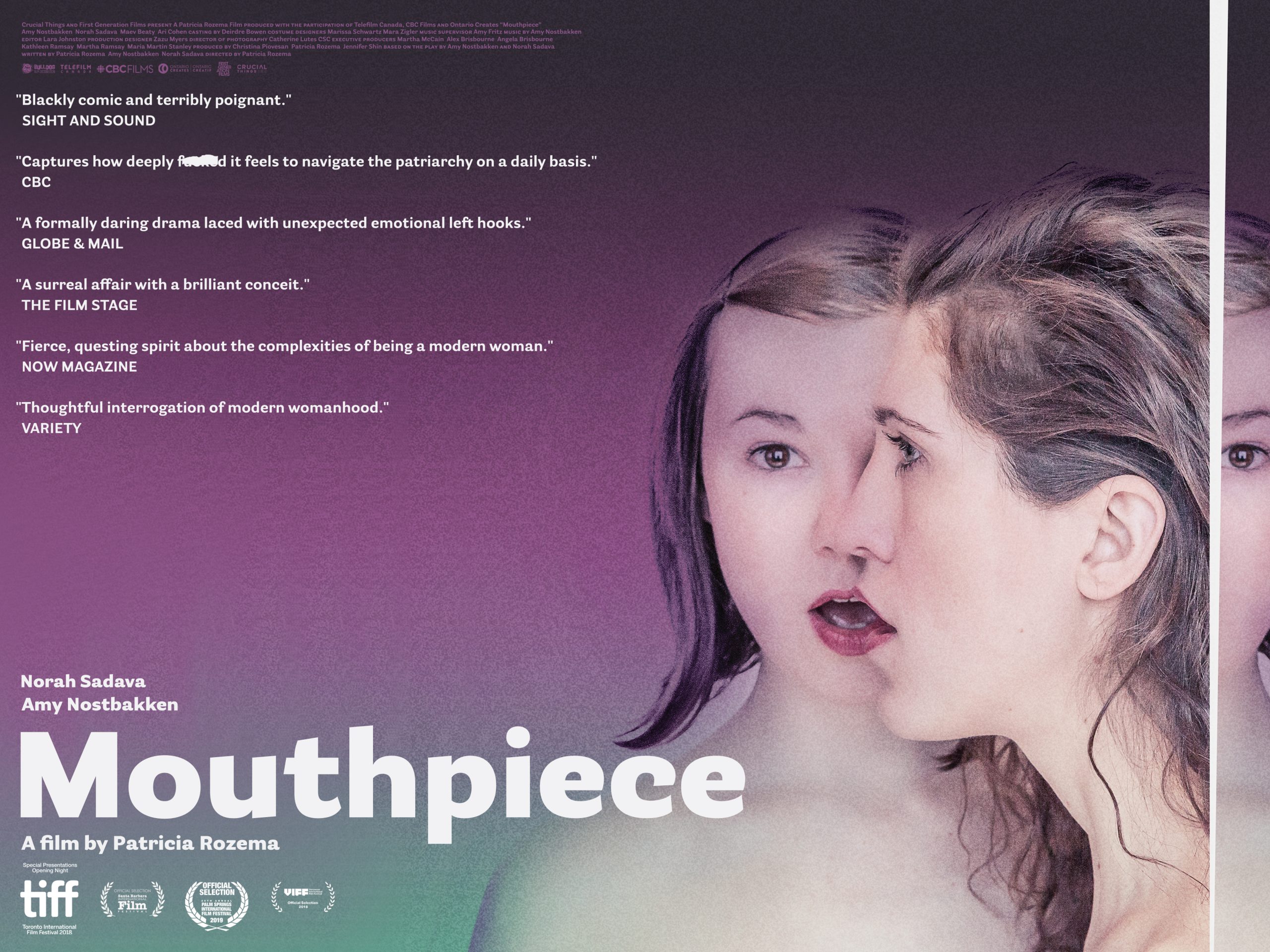 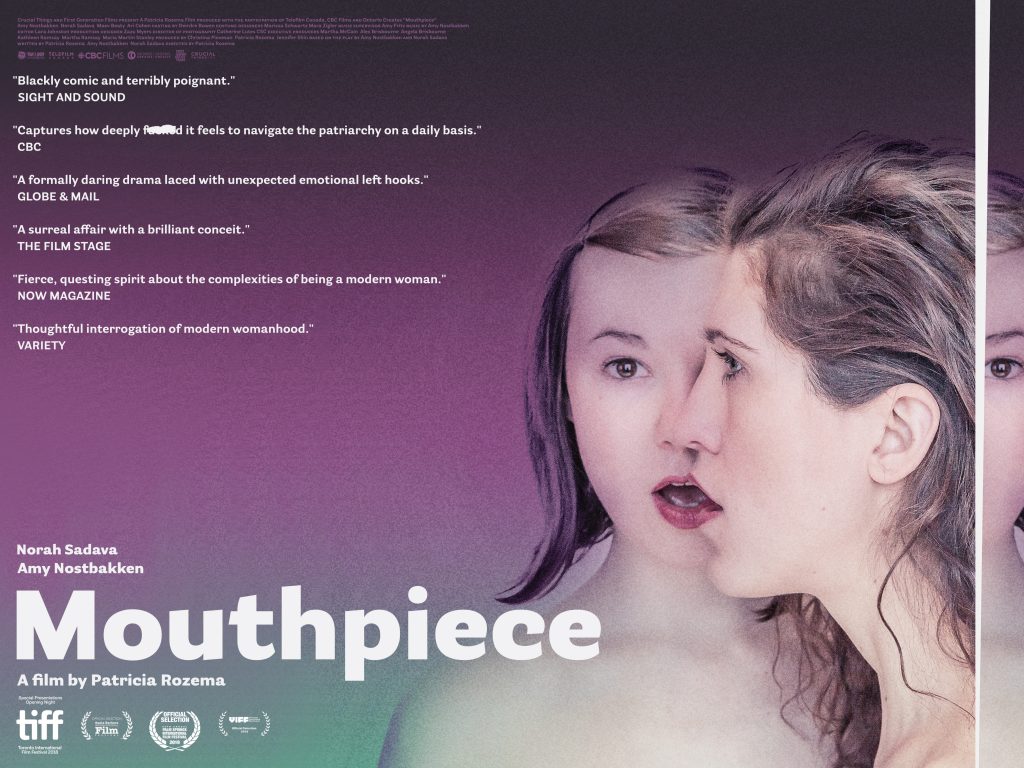 We are pleased to announce the release of MOUTHPIECE directed by Patricia Rozema (Mansfield Park, Into The Forest), available in virtual cinemas and on demand from 12 March. MOUTHPIECE is a powerful, funny and highly original look into the conflicted psyche of a fiercely independent millennial woman, played by two actresses simultaneously – Norah Sadava and Amy Nostbakken. Emmy-winning Canadian writer, director, producer Patricia Rozema wrote the screenplay with Amy Nostbakken and Norah Sadava which was loosely adapted from the acclaimed play by Nostbakken and Sadava.

Cass (Norah Sadava & Amy Nostbakken) is a single writer who lives by her own rules. She’s also a bit of a disaster. Following the sudden death of her mother, Elaine (Maev Beaty), she finds herself in crisis, unable to think straight with a debate raging inside her head. MOUTHPIECE makes that invisible conflict visible: Cassandra battles it out while figuring out what to say at her mother’s funeral. What unfolds is a wild careening through grief, anger, sex and self-sabotage in an exploration of the messy lives of women from both generations. Raucous jokes, musical numbers and heart- breaking memories add up to a deeply moving and political portrait of a mother and a daughter as seen through the eyes of one conflicted young woman.

Describing female relationships and the intriguing complexity that accompany them, was the initial idea for co-writers/actors Amy Nostbakken and Norah Sadava to create the stage play MOUTHPIECE, often basing their writing on their autobiographical experiences and things they were feeling, thinking and learning about themselves as women in the world. When director Patricia Rozema was introduced to the play by her daughter, she was immediately struck by its originality and strength in tapping in to a primal, visceral feeling that she had never seen represented before. The metaphor behind having two actors play one role resonated with her and made her reflect on how it might work on film: ‘I often feel double-ness, twoness, a conflict inside myself. Lots of people do. This dichotomy has never been presented physically on film. Externalising this feeling and making it a physical fact, felt fresh and completely emotionally honest.”

Their creative collaboration in bringing MOUTHPIECE from stage to screen creates a bold, unconventional female story that’s both thought-provoking and packs an authentic emotional punch. The fascinating experimental score created by Amy Nostbakken emphasizes the internal battles Cass faces and the impressive cinematography by Catherine Lutes, often using mirrors and beveled glass, highlights the dual performance of Amy and Norah, sometimes moving in unison and sometimes at odds with each other. 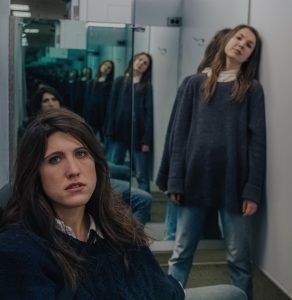 Writer/Director Patricia Rozema’s internationally celebrated first comedy feature, I’ve Heard the Mermaids Singing won the Prix de la Jeunesse at the Director’s Fortnight in Cannes, and opened the Toronto International Film Festival in 1987. Other highlights include writing/directing the contemporary lesbian love story When Night is Falling, adapting/directing the politically progressive Jane Austen feature Mansfield Park with Harold Pinter, and co-writing HBO’s Grey Gardens starring Drew Barrymore and Jessica Lange (PEN Screenwriter’s award, Emmy nomination and a Golden Globe). She also won an Emmy for writing and directing a Yo-Yo Ma/Bach film Six Gestures. In 2015, Rozema adapted and directed the apocalyptic thriller Into The Forest with Ellen Page and Evan Rachel Wood. She has also directed Anne with an E and Mozart in the Jungle for Netflix/CBC & Amazon.

Award-winning director, playwright, performer and composer Amy Nostbakken is co-artistic director with Norah Sadava, award-winning performer, director, and playwright, of the theatre company Quote Unquote Collective in Toronto. Together they have created and performed in numerous productions internationally including ‘Mouthpiece’ (Coach House Press) and recently Quote Unquote’s six-woman show ‘Now You See Her’.

MOUTHPIECE had its world premiere at the Toronto International Film Festival 2018 followed by Vancouver IFF and is produced by Patricia Rozema through her company Crucial Things and First Generation Films’ Christina Piovesan and Jennifer Shin (The Nest, Strange But True, French Exit).