In the midst of nowhere, five men are stuck in a snowstorm. One has to cross the Woods to reach town, but that’s insane in the midst of winter: the road is snowed over, you can get lost and freeze, the wolves are hungry and can be heard howling all night long, and who knows what other creatures roam these woods…? Still, early that morning, Petar Motorov must have harnessed his sleigh and headed to town. Nobody saw him leave, but the falling snow still hasn’t fully erased his tracks. But when the sleigh returns, Petar Motorov isn’t on it. Inside the men find only Motorov’s fur coat, his shotgun, and the frozen carcass of a wolf. Where is Petar Motorov, and what has happened to him? There’s only one way to find out…
Five men caught in a limbo between life and death, past and present, communism and capitalism, known and unknown, here and there, try to resolve a mystery, which slowly devours them. Inspired by the eponymous play by Nobel Prize Nominee Yordan Radichkov and reinterpreted for world audiences by acclaimed documentary filmmaker Andrey Paounov, it is a bold fiction debut of a director who has made a name by exploring, with a sense of humour, the existential absurdities of the post-socialist state in the language of cinema. 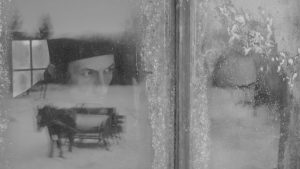