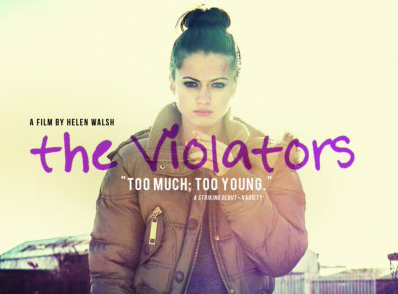 The Violators presents the big screen debuts of two rising young British actresses, Lauren McQueen and Brogan Ellis, whose performances have been noted by critics as “admirably played by a fine cast – with 18-year-old McQueen, a particularly strong discovery“.

Bulldog Film Distribution are thrilled to have acquired the UK rights to this complex and compelling testament to British film making and aim to release the feature in select cinemas across the UK and Video on Demand in June 2016.

More about The Violators.

After testifying against her abusive father, Shelly, 15, finds herself rehoused on a sink estate she can barely call home. A petty thief, Shelly spends her days roaming the estate and docklands in search of opportunities. When she attracts the attention of estate loan shark and groomer, Mikey Finnegan, 40, Shelly finds herself thrust under the watchful gaze of a mysterious stranger, Rachel, 17. As Shelly’s relationship with Mikey develops, so does Rachel’s fixation with Shelly. The shock-revelation that Shelly’s father is to be given early parole forces Shelly to make a decision that will alter the fates of all three of them, forever. Set amid the desolate beauty of a post-industrial wasteland, The Violators is a meditation on the meaning of home, and the potency and fragility of young girls’ sexuality.